Syndactyly is a condition in which a child is born with two fused fingers or toes. This can occur in the hands or the feet or both. It can occur in one hand or foot, or all four. Syndactyly is the most common congenital malformation of the limbs.

Syndactyly can occur sporadically or be inherited and occurs in 1 out of 2,000 births. In 15-40% of patients there is a family history. 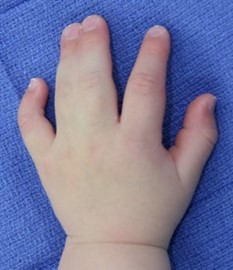 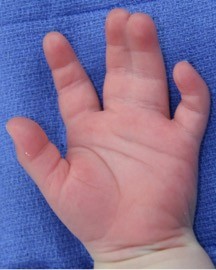 Figures above: Child with simple complete syndactyly between the middle and ring fingers of the left hand.

What do we think causes it?

The upper limb develops early in fetal development. Normal fetal upper limb development includes the formation of webs between fingers and toes. The hands and feet have a similar appearance to the webbing of the foot of a duck. Around the sixth week of fetal development, the body gives a signal through specific signaling proteins (one important one is called sonic hedgehog) to cause regression of these webs between the fingers and toes, and this process is termed interdigital apoptosis. When there is failure of the regression between the fingers or toes, the remnant webbing site is termed syndactyly. This process of interdigital apoptosis, or regression of the webbing, is why we have webspaces between fingers and toes.

How and when is it treated?

Treatment of syndactyly is dependent on the severity of the syndactyly, other medical issues, desires of the family, and functional concerns. The goals in treating syndactyly are to ideally separate the fingers to maximize function of the hand.

Timing of the treatment surgery depends on the complexity of the syndactyly. Simple syndactyly of the index and middle fingers or middle and ring fingers is usually treated prior to two years of age. However, simple syndactyly involving the thumb and index finger, or ring and small finger, may impact the direction of the finger growth given the difference between the finger lengths, thus surgery is frequently performed prior to one year of age. Similarly, patients with complex syndactyly with bony fusion have risk for abnormal finger growth, thus your surgeon may recommend treatment prior to one year of age. 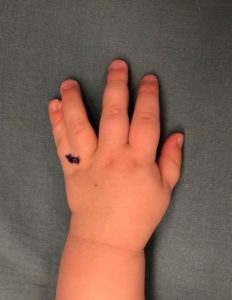 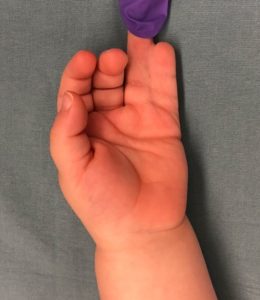 Figures above: Child with ring-small syndactyly. Surgical release was performed prior to 1 year of age.

If you need assistance with this, please feel free to contact me or book an appointment.